When a group of selected friends of our unforgettable Eric Ekvall (see Farewell Eric, in http://ticsddhh.blogspot.com/2013/11/farewell-eric.html), among those who included Alfredo Weil, we received the message informing us that he had been detected a terminal cancer, practically saying goodbye to us, Alfredo replied: “Moved by the news, but more by your attitude. I am a man of faith, and I feel that you act as if you are also a man of faith. You have spiritual tranquility because you have been a pure man. That is the greatest happiness you can have, even in adversity”.

I don’t even have to tell you that Alfredo did the impossible to raise funds for Eric’s disease. I had no idea Alfredo that what he said to Eric applied so much to himself because if any definition I can find of this exceptional human being that was Alfredo Weil he is precisely that: a pure man. In that painful and long illness that harassed Alfredo until the end of his life on March 14, 2019, I’m sure he thought the same thing that he said to Eric, “that’s the greatest happiness you can have, even in adversity”. And if someone like me knew him for so few years (2012-2019, although sometimes a few years can represent a lifetime), I don’t imagine that his closest friends and, of course, his family could say to confirm that statement. Because I believe that he was, a pure and integral man…

For me, Alfredo Weil was a discovery. He had something that always caught my attention because it’s something I shared with him, he mixed the technical with the humanistic. In his case for his condition of Engineer and Lawyer; and in mine for computer technician with a mixture of a little of Economy, Human Rights, Administration and Studies of the Development. Maybe that’s why I had so much affinity with his thinking and his positions before the country. But beyond that, personally I felt a very close affection for Alfredo but I did not know why until in a private conversation of many that we held, we had a mutual revelation that explained it: we had both tragically lost a daughter. And that, my dear friends, is a pain that only a father can understand. And sharing that pain with someone who had the same experience unites you in a special way with that person.

I saw Alfredo Weil for the first time when he approached me at an event at the Metropolitan University in August 2012, where opposition technicians from the La Colina Group explained the electoral system they had approved with the CNE of Chávez’s regime, before the 7Oct-2012 process. There Alfredo congratulated me effusively for a note that he had published the previous month (see Technical Unity, in http://ticsddhh.blogspot.com/2012/07/unidad-tecnica.html) where I proposed a Technical Unity between those of us who opposed the Venezuelan electoral system in the different tribunes and those who agreed with the government on the technical conditions of the elections.

I really felt not only flattered because coming from this character so recognized in the country, who without knowing me humbly recognized a contribution to the discussion, regardless of where it came from, to improve what ESDATA had done, which was a lot, but he put himself to the order to work for it. He told me with joy and firmness that I still remember: “Luis Manuel, I wanted to meet you and I congratulate you. It is such a simple solution that nobody saw it. I am willing with ESDATA to accompany your proposal”. And I said to myself on that occasion “this is a different technician”. Because technicians are not usually generous or give anything to anyone. The reason Alfredo Weil was different was because besides being an extraordinary technician, he was essentially a humanist. And such greatness is not common.

From that meeting we met several characters that we had never seen before until that day and we only knew each other by our opinions in social networks: Alfredo Weil (and other friends of ESDATA), Iñaki Gaizaraín, Eric Ekvall, Guillermo Salas, Marisol Sarría, Adriana Vigilanza, Kika Bisogno, Ludwig Moreno, Pablo Brito Altamira, just to name a few that come to my memory that day. And from there we decided to meet permanently in what we call the Electoral Group, a platform with no other purpose than to fight against the technical fraud accepted by the official opposition and to obtain better conditions for the electoral processes in Venezuela. From that group came proposals, communications, public letters, actions before the courts challenging electoral processes, of which Alfredo Weil was a fundamental technical factor. From there also a friendship was born that lasted in spite of time and differences. And now, with the loss of Alfredo, it also transcends even further because it commits those of us who still remain.

And why do I say compromise? In ESDATA, Alfredo Weil and all those of us who in one way or another have collaborated with our small grain of sand in improving Venezuela’s electoral processes, this struggle against the regime that has countless fronts, found a wall that I personally am not willing to yield and I believe that neither are any of those who have accompanied Alfredo Weil to this day in that struggle for that electoral adjustment. Alfredo was still ill (and now we know that he was dying) when he published his last proposal that I mentioned in my note just a week ago (see It’s not the Rectors, it’s the System, en https://ticsddhh.blogspot.com/p/its-not-rectors-its-system.html): “@AlfredoWeil “For the first time I am going to make a “thread” to expose my point of view on the possibilities of future elections, after the cessation of USURPATION.” https://twitter.com/AlfredoWeil/status/1096939253974683648)”. Those of us who accompany him must continue in honor of that.

And that’s because personally I feel like a Venezuelan obliged to continue with that work even if it’s to do one hundredth of what Alfredo Weil was capable of doing. I try to put into words the impotence that gives me that people of Alfredo Weil’s personal and intellectual caliber leave this world when we most need your help to solve the major problem that Venezuela has to solve its electoral problem. And you will say that it may seem like a selfish and utilitarian stance, but we are missing out on what is most valuable and what we most need for this troubled country to function in the future: honest people, pure, decent and with citizen values, all this combined with an intellectual brilliance and the desire to work for Venezuela that is too difficult to find in these times.

Those of us who knew him, always accompanied by his inseparable “Wilson”, who was as he used to say to his “tablet”, where he possessed all possible electoral analyses, recognize that what was as a human being, as a technician and as a humanist will be irreplaceable.

I share with you this wish of Alfredo Weil for several of his friends from 2014 onwards, which may serve as an everlasting memory of this exemplary Venezuelan:

“May we contribute to rescuing our country from the dark night in which it finds itself, and may we culminate it with a free, sovereign, united and just homeland…”

And so we will do it as a commitment to you and to Venezuela my dear friend, count on it… 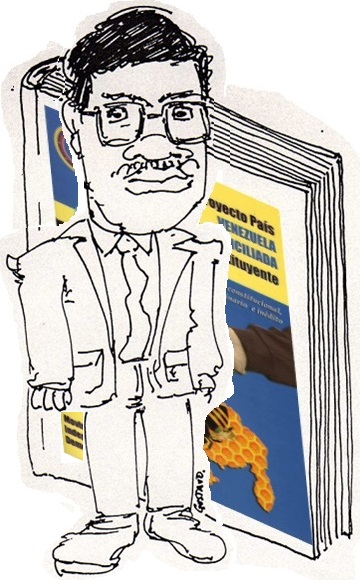